In a number of books on negotiation the authors speak about negotiation settlement ranges.  The assumption is that both parties have their desired positions and a walk away position. In the Suppliers case they will never go below a certain amount and Buyer will never go above a certain amount. So the premise is the bargaining zone for the negotiation will be where the Buyer's and Supplier's ranges overlap. This is how it looks graphically. 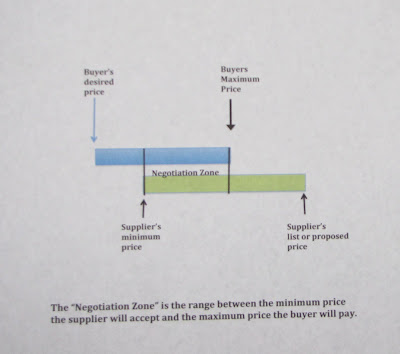 This is a great concept in theory, in practice it’s not very useful as in most negotiations you are not dealing with a single issue such as price alone, you are dealing with many issues that affect the cost of the relationship and your life cycle cost.
The simple fact is Buyer’s may be willing to pay more than what they consider to be their worst case price if they see additional value. The may also pay more if they need what the Supplier is selling and simply don’t have an alternative where they can walk away. Similarly, Suppliers have been known to sell for less than their worst case if they see additional value from the sale or they need the business and can’t walk away. This means that depending upon the circumstances of each of the parties at the time of the negotiation and the leverage each party has, their best and worst cases will change and so will the “bargaining zone.”
Even on strict price negotiations who you buy from will impact the bargaining zone. For example if you buy from a Supplier subsidiary their bargaining zone will be impacted by what they had to pay to purchase the product at the transfer price from the Supplier and what overhead and profit they need to make for that subsidiary. If you purchase a product from a distributor their bargaining zone is going to be impacted by the deal they have with the OEM. Most distributor relationships fall into two price models. A common type is the distributor is given a discount off the Suppliers list price, so their worst case selling price be based upon that discount plus what they need to make to cover their overhead and profit.  The other distributor model is more of a price protection approach has target selling prices and they get their discounts and margins by staying close to the target selling price, so their bargaining zone may be very small.
As a Buyer going into a negotiation, its important to establish your goals and what your walk away point would be as that sets your own bargaining zone. Its also important to track and consider the impact of each concession on the total cost of the relationship. Where you really get value you may agree to pay more than planned. If the Supplier clearly wants to provide you less under the contract you want to make sure that each time that is proposed you have the expectation that you will pay less as a result.
When should you try to uncover the Supplier’s bargaining zone? Normally I wouldn’t care about the Supplier’s bargaining zone as their responses as part of the negotiation would indicate where it will be. If I felt it appropriate I could include a target price as part of a RFP to serve as an anchor for negotiations. The key is to never head too far down the path with the Supplier (especially if the circumstances could lock you into using them), before you know whether or not the potential deal will be acceptable. I’ve seen too many Buyers have to settle for bad deals simply because they had either invested to much into the relationship to walk away or because they simply did not have the time to start over with another supplier.
Posted by Jack at 9:54 AM

Jack
After a career managing contracts and procurement organizations and after thousands of negotiations, there are a number of things I learned that I want to share with individuals that want to negotiate procurement contracts. Want to send a message, ask a question or suggest an improvement to a post? Go to my website knowledgetonegotiate.com and click on problem or suggestion and you'll find my address.