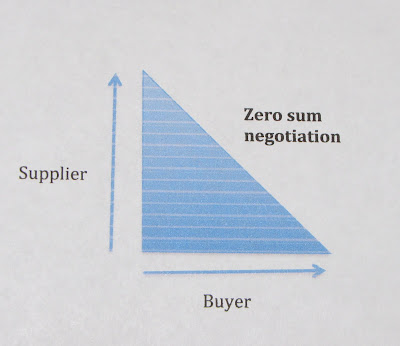 This showS it as a fixed pie where for either party to get more the other party must get less as is represented by the area in the triangle. The more buyer gets the less supplier receives and vice versa.

When they describe win-win it is graphically described like this where the area is expanded to the pareto optimalization curve: 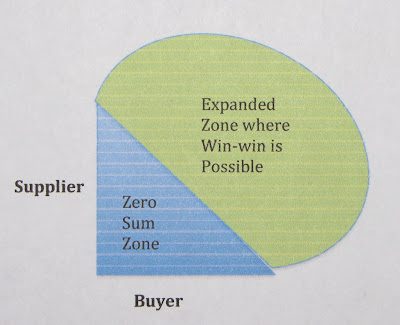 There is another concept called value equivalence. Graphically that looks like this 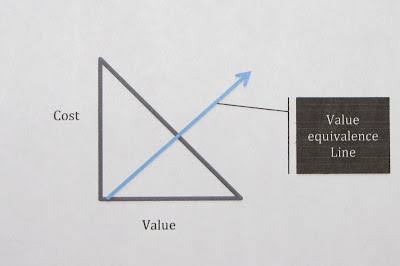 When you merge the concepts together what you see is the real story behind win-win. 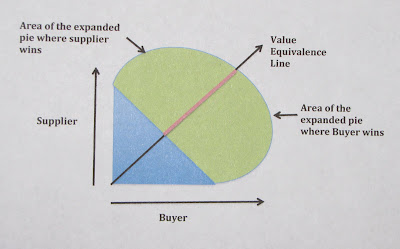 When you expand the pie the only point in the expanded area where both parties get a win of equal value is when the value of what you are giving up is equal to the value that you are getting
and that falls on the value equivalence line that I highlighted in red..

Whether it’s dividing up the limited pie of the traditional negotiation represented in blue or the expanded area needed for “win-win” negotiation represented in green, you are still dividing the pie. It’s still a negotiation. The other party still wants to win. They also want their win to be much bigger than your win. Unless the cost of what you are giving up to get you win is equal to the value you are receiving to get that win, you really aren’t winning.

Let's put the idea of expanding the pie into a procurement perspective;

You could potentially expand the pie by giving a supplier a larger percentage of your business. There are costs or risks associated with doing that. What happens if there is a problem with their supply and you don’t have an immediate alternative you can use?

You could potentially buy more of their best in class products to expand the pie, but what impact will that have on your ability to leverage your other suppliers? You may wind up getting more from the one but losing with the other.

There will be times when what you are buying is all that you need or want so there is no
opportunity to offer anything more than a good faith promises to use them in the future. Most suppliers that I know need to see a benefit to them today before they will agree to give you a concession.

On major deals you may be able to expand the pie, but that frequently complicates the negotiation. It doesn’t complicate it with the supplier, it complicates it with the internal stakeholders that may be impacted and who will always focus on their interests. Officers of the company that can look at what’s best for the company without being weighed down by individual group’s interests usually have a better chance to use principled negotiations than procurement people.

The one area where I’ve seen win-win or principled negotiations work in procurement is when
both companies have a common goal of teaming together to win a customer’s business. Even there it can be difficult. For example if a supplier has a product or service that the customer wants or has specified and that supplier knows it, the negotiation between the prime contractor and the supplier may be a win-lose negotiation as they know they have the business. So unless the prime can offer them something that relates to another project where the supplier doesn’t have, but wants that business, it’s hard to expand the pie and get into principled negotiations.

The one aspect of principled negotiations that every procurement person can learn from is the advice to focus on interests, not positions. Part of any negotiation is being able to reason or explain to your counterpart what your interests are and why you have the position / interest you have. Most of the time that will open a dialog where since they now understand the issue or the problem they can look at their position and view it against their real interests.
Posted by Jack at 11:37 AM

Email ThisBlogThis!Share to TwitterShare to FacebookShare to Pinterest
Labels: Win-win

Jack
After a career managing contracts and procurement organizations and after thousands of negotiations, there are a number of things I learned that I want to share with individuals that want to negotiate procurement contracts. Want to send a message, ask a question or suggest an improvement to a post? Go to my website knowledgetonegotiate.com and click on problem or suggestion and you'll find my address.